This year L D A Ltd has agreed to sponsor two rugby players for the up and coming new season.

We have decided to sponsor current Championship Player of the Year, Michael Le Bourgeois who signed for Wasps from Bedford Blues. He has joined an already very exciting squad but we feel he has a great opportunity to break into the starting XV and we look forward to sharing his first season with him.

Managing Director Paul Wright met with Michael earlier in the week and said “Booj is a tremendous rugby talent and we cannot wait to see him play for Wasps after his exciting step up from the Championship. We are confident that he will embrace the transition and we are glad he’s enjoying his time in Warwickshire. He is a lad who is known as a complete player with a varied skillset but he is also a top lad with it – and we look forward to sharing a few drinks together over the course of the season and developing a strong relationship with him and Wasps” 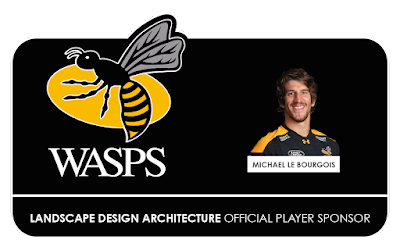 Our second player that L D A Ltd has sponsored is Ryan McSorley who is a player for local rugby club Old Wheatleyan’s RFC in Coventry. Ryan is a well-liked member of the playing squad and has recently qualified as a Pharmacist.
The full article can be read here

We have been busy working with Metropolitan Housing, Brand Consulting & Terrance O'Rourke for Countryside Properties PLC in scheme delivering 531 homes in Phase 1.

Our proposals were accepted by LB of Barking at a Planning Committee on Monday 12th February and celebrated well by the team who have successfully worked on the scheme for over a year.

Paul Wright explains about the pivotal role that LDA played in the Landscape Masterplan...
"The design of the open spaces is part of a coherent vision for the development to encourage a range of different activities and uses by providing a sequence of legible public spaces and streets with a neighbourhood feel. The open spaces are important elements of the development and will be developed in accordance with the principle aim of creating high quality public spaces that are safe and accessible to all of the developments residents and visitors.

As a result the public realm recognises the importance of the relationship to the River Roding and the pedestrian connections through the development connecting with the wider community of Barking."

LDA Ltd have now been novated across to deliver the Stage 4 drawing package.

A four-storey extension to the Headquarters of Holland & Barrett, the UK’s leading retailer of vitamins, minerals and herbal supplements. We worked closely with Deeley Construction and the architect (Robothams) to create a solution for Holland & Barrett expansion.
This fly-through shows the expansion (credit to Fire Fly)

CALA (North Home Counties) Ltd have been successful in their planning submission for 35 dwellings in Duxford, South Cambridgeshire. The presentation went in front of Committee and approval was granted yesterday. LDA worked with CALA in-house architects, Savills, Infrastructure Design Ltd, Ruskins and Ethos Environmental to design the scheme.

Our brand new website has been luanched and includes some of our most recent projects that are currently being constructed. Keep an eye on the site for further content and news, whilst our two socials (above) are the two main sources for current information.

LDA are also looking to recruit - please send your CV and a covering letter into the address below.